Lead Actresses Heather Beeman and Madeline Maser along with several members of the cast from the JEZEBETH motion picture and TV Series make a special appearance at Shark City in Glendale Heights Illinois. This star studded event included performances by The Texas Hippie Coalition plus Dark Star Records Artists Sacred Dawn and True Witness. Other highlights of the evening included a media photo shoot with The Girls of Jezebeth, Baby D Frost’s Birthday Bash and an appearance by Director Damien Dante. Also attending were executive producers Jeffrey A Swanson and Lloyd Freeze.

We are pleased to announced that the Filming of the Jezebeth TV series pilot “Abigail” is nearing completion . Previously the two Jezebeth franchise owners Damien Dante and Jeffrey A. Swanson had signed a six figure deal with the Phoenix Group that included 3 films and a TV series. Shortly after the completion of the motion picture “Jezebeth”, the cable TV series went into production. Filmed mainly in a Victorian style mansion in Richmond Illinois , the location was the perfect setting for the home of Jezebeth. The first episode Introduces the young nine year old vampire star Abigail. This spin off of the movie Jezebeth will keep you on the edge of your seat. The TV series will give the viewers all that they long for; sexy vampires, torture, drama, and yes.. plenty of blood. The TV series stars; Heather Beeman as Jezebeth, Drake Mefestta as Jonah, Frank Warpeha as Carl Trulane, Gwendolyn Graves as Cyanide, and Madeline Maser as the clairvoyant Lenora. The Show is Directed, Produced and Written by Damien Dante and Co-Produced by Jeffrey A Swanson. International Distribution is being handled by the Phoenix Group. With only one weekend left of filming, the final scene to be shot will be the epic vampire bar scene. The producers of the TV show are now looking for extras to be a part this last scene.

For more information on becoming an extra go to:

Meet The Cast of the Jezebeth TV Series: 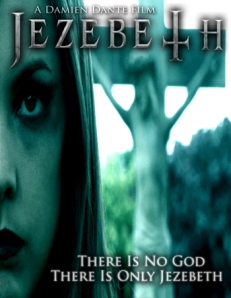 SGL Entertainment and Satania 6 Films in association with Dark Star Records have signed a six figure multi picture movie deal with The Phoenix Group. This worldwide deal includes foreign and domestic rights to Jezebeth, Jezebeth II, Jezebeth III, the Jezebeth cable series pilot and more. The Phoenix Group who also represent the films: Boggy Creek, Renfield and Abduction have offices in Palm Desert California, Boca Raton Florida and Atlanta Georgia. Jezebeth the Motion Picture was written, directed and produced by Damien Dante along with Executive producers Jeffrey A Swanson and Lloyd Freeze. The film stars Bree Michaels as Jezebeth. Bud Schaffer the CEO from the Phoenix group told the two franchise partners Damien and Jeffrey that he was very impressed with the teaser trailers, name, logo, graphics, media and press that he had seen. And, also that the promo video “The Girls of Jezebeth Storm Hot Topic” was proof that Jezebeth had it all.

The Phoenix Group will be taking Jezebeth to MIPTV in Cannes, France from April 4-7, 2011 and this is only the beginning. With two more motion pictures and a television show in the works, Jezebeth stands ready to devastate anything in her path…

Teaser Trailer for the movie Jezebeth:

For more info on the movie Jezebeth go to: