We are pleased to announce that the Dark Star Records 15 year anniversary party will be held at the Tilted Kilt in Elgin Illinois on June 15th, 2012. Our Biggest Event of the Decade Featuring: BLOODSTREAM PARADE, The Debut Performance of the THE SKULL with original members of TROUBLE: Ron Holzner, and Eric Wagner along with: Lothar Keller, Gregg Potter and Michael Carpenter Playing The Music of TROUBLE, also performing Live is Dark Star Records Recording Artists: SACRED DAWN and TWO TON ANVIL Plus GUITAR GIVEAWAYS, DOOR PRIZES, RAFFLES, AUTOGRAPHS, CD’S, DVD’S, T-SHIRTS AND MORE!!

SPECIAL GUEST APPEARENCES FROM THE CAST OF
JEZEBETH, THE MOVIE AND TV SERIES!!

Dark Star Records has been bringing the world some of the best music on the planet for more than 15 years!!! We now have more than 30 bands and have put out over 50 releases!!! Our artists have been featured in movies, commercials, video games and more!!! And, thanks to our many partners like Sony Entertainment, you can play our music on any device anywhere in the world!! Dark Star Records would like to thank all the Artists, Employees, Interns, Associates, Partners, Media Outlets and most of all the Fans, for making our Label what it is today!! And, what it will be tomorrow!!

From all of us at Dark Star Records
This party is for You!!

This Event is Sponsored by our Partners, Spindisc Media and Strociek Music

Lead Actresses Heather Beeman and Madeline Maser along with several members of the cast from the JEZEBETH motion picture and TV Series make a special appearance at Shark City in Glendale Heights Illinois. This star studded event included performances by The Texas Hippie Coalition plus Dark Star Records Artists Sacred Dawn and True Witness. Other highlights of the evening included a media photo shoot with The Girls of Jezebeth, Baby D Frost’s Birthday Bash and an appearance by Director Damien Dante. Also attending were executive producers Jeffrey A Swanson and Lloyd Freeze.

Meet The Cast of JEZEBETH 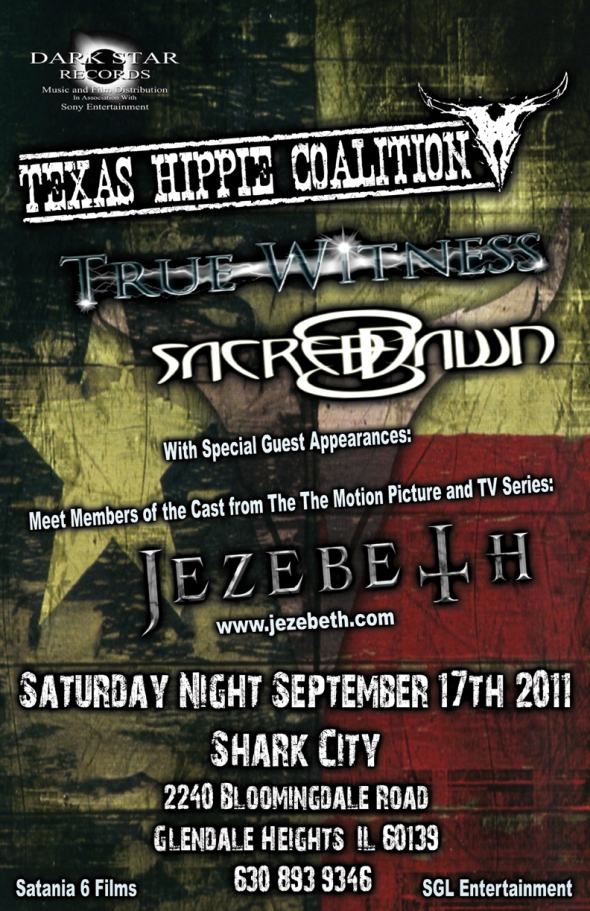