Jezebeth “World Premiere” To Be Held At The Portage Theater 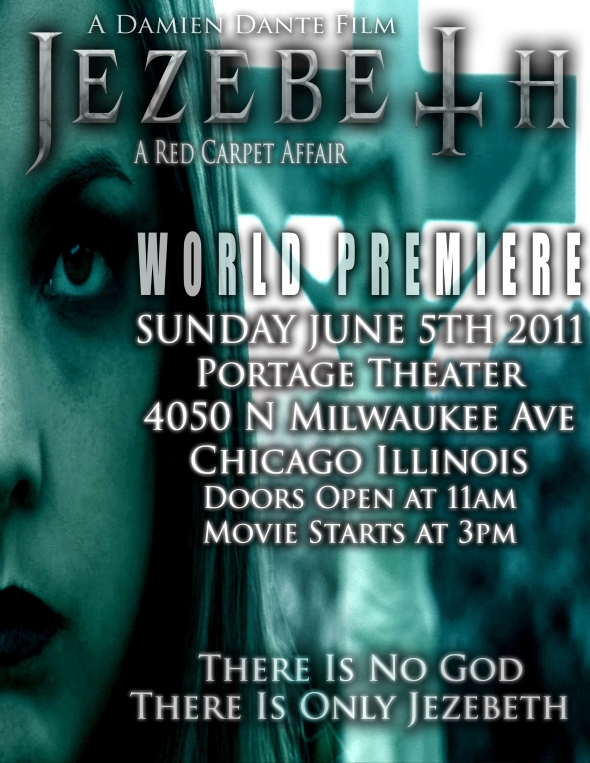 The much anticipated world premiere screening of the vampire horror film Jezebeth, will be held at the historic Portage Theater in Chicago, on Sunday, June 5, 2011. This historic theater can seat up to 1,400 people and has a giant screen that will bring the demon Jezebeth to you in a larger than life presentation. The Portage Theater was also one of the settings for Johnny Depp’s movie Public Enemies. The screening will officially kick off the Jezebeth film franchise, including the Jezebeth cable series pilot filming this summer. SGL Entertainment and Satania 6 Films in association with Dark Star Records have recently signed a six figure multi picture movie deal with The Phoenix Group. This worldwide deal includes foreign and domestic rights to Jezebeth, Jezebeth II, Jezebeth III, the Jezebeth cable series pilot and more. The future looks bright for the Jezebeth filmmakers, cast and crew. And, this will be the first public screening of this soon to be cult classic horror film. Doors open at 11am and the movie Starts at 3pm. Meet the Cast, The Girls of Jezebeth, get Autographs and much more. Tickets will be sold in advance and at the door. Admission is only $10.00 per person. And, This is a Red Carpet Affair.

Buy your tickets now at Ticketleap.com and receive a free goodie bag at the door. And, that’s not all. If you purchase your tickets right now online you’ll also get a Silver VIP Pass. Here is the Link to get your tickets online:

For more info go to:

This entry was posted on May 31, 2011 by sglentertainment. It was filed under Uncategorized .